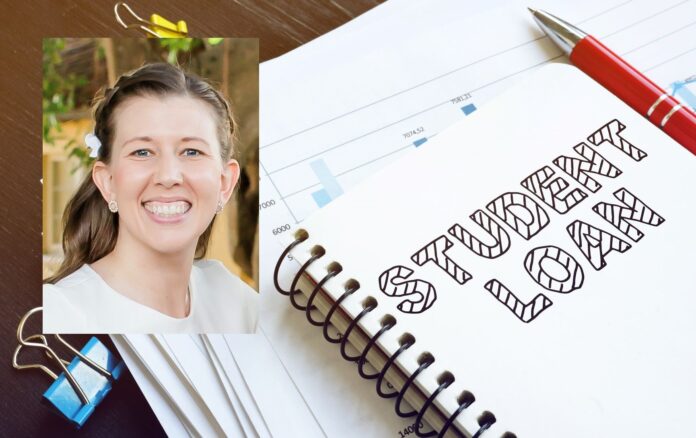 One year ago, Janelle Hanaburgh gave herself a 30th-birthday present: she finished paying off more than $100,000 student loans in just seven years. “I feel free now,” she said.

Originally from Poughkeepsie, New York, Janelle earned a bachelor’s degree from Southeastern University in Lakeland, Florida, and a master’s in social work from Adelphi University on Long Island. After finishing graduate school, she put her education to work in the foster care division of Florida Baptist Children’s Homes. Later, the organization promoted her to director of foster care for the southwest Florida region.

While making the transition from school to the working world, Janelle felt a strong desire to pay off her education debt as soon as possible. She committed herself to saving consistently and making extra payments to the principal of the loans.

With each loan she paid off, her confidence began to build. “I knew it would be gratifying every time I paid one off,” she said. “Looking at my biggest loan was intimidating, but looking at the smallest one, it didn’t seem out of reach. I kept a little Excel spreadsheet where I tracked everything that I paid off.”

Once Janelle started making progress, she felt empowered to set other financial goals: “I wanted to put every cent down on my loans, but I felt compelled to start saving too.” With every paycheck, she began “paying herself” by depositing a portion in savings. Each year, she increased the amount she was saving and the amount she paid on her student loans, without exception.

Her goal was to pay off the loans and save up to buy a home. To maintain this level of saving, Janelle made many sacrifices. She skipped vacations with friends and family, and she lived with her parents to cut her monthly expenses to a minimum. But she also made sure to have some fun. “I would try to take a trip here and there, a little vacation if I could, just to not be miserably paying,” she said.

“My parents have always been supportive,” she said. “One thing they felt like they could offer us—even if they couldn’t help us with our tuition—is that they were never going force us to move out. It was a sacrifice I was willing to make to save money that I would have otherwise been spending on rent.”

Janelle set a goal of paying off her debt before she turned 30. And as her birthday approached, she realized she had saved enough money to pay off her student loans once and for all.

“I knew it would be freeing to pay it off, but that’s not what I was saving it for,” she explained. “I was getting the itch to be in my own home, but knew I did not want to buy a home if I still had loans.”

Finally, Janelle took the plunge and paid off her remaining debt with her savings. It took her just seven years to pay off more than $100,000, an impressive 23 years ahead of schedule. With no loan payments and a healthy saving habit, she could replenish her account within a few months. Not only is she free of student loans now, she recently purchased her first home!

Janelle’s advice to women trying to pay off their student loans is simple: Make a budget, track your expenses, cut down needless spending, learn to save, and be generous.

“For me, savings changed my life,” she said. “I started with a $100 out of every paycheck, but even if it’s $25, put money into savings from every paycheck, and make it non-negotiable.”

While working toward her financial goals, Janelle never forgot to give back, and she encourages others to do the same. “Look for opportunities to be generous,” she continued. “One of my prayers was ‘God, I want to be able to bless more people.’ I felt like I couldn’t bless a lot of people with so much debt hanging over my head, so I would still look for those little opportunities.”

In the end, all the hard work paid off. “Now I feel like I’m just living,” Janelle said with relief. “Before, I felt like I was working to pay off my loans. Now I feel like I’m living a normal life and still trying to do it responsibly.”

Three Tips to Save Money During Inflation