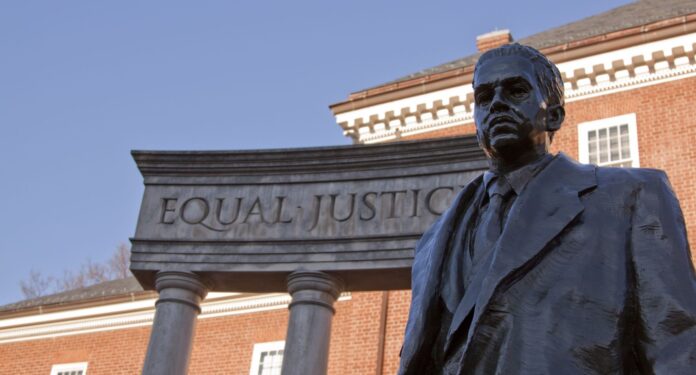 When looking over the work and legacies of United States Supreme Court Justices Clarence Thomas and Thurgood Marshall (deceased), one would be hard-pressed to find men of more legally divergent views. But upon closer examination, it is noteworthy that these scholars have held many things in common in regards to their personal experiences, the value they placed on hard work, and their motivations as attorneys and judges. While their jurisprudence is dissimilar, both Marshall and Thomas in their respective generations, have helped advance justice and affirm individual liberties in America.

Thurgood Marshall was born in 1908 to William and Norma Marshall in Baltimore, Maryland.

He attended segregated public schools like many of his peers. Thurgood was bright but did not apply himself at times, choosing to be a jokester. His antics often earned him the “opportunity” to memorize sections of the Constitution before returning to class. It’s been said that by the time he graduated, Marshall had memorized the entire Constitution.

His father strongly influenced Thurgood’s fun-loving nature, wit, and characteristic loudness. William Marshall could be loud, unruly, stern, delightful, and engaging. Additionally, Mr. Marshall did not tolerate racist comments, and he trained his sons not to accept them either. Although his education was limited, William was an avid reader and stayed engaged in local politics. Often, he would take Thurgood and his older brother, Aubrey, to the courtroom to observe trials. Then, over the dinner, William would prompt his sons to discuss and debate the facts of the cases. Thurgood’s interest in debate strengthened in high school. Classmate Charlotte Shervington recalled, “Thurgood was a marvelous student. He could outtalk and out-argue anybody.” After he became an attorney, Thurgood credited his father for developing his abilities, saying, “He never told me to be a lawyer, but he turned me into one…by teaching me to argue, by challenging my logic on every point, by making me prove every statement.”

Norma, a stay-at-home mother and later a teacher, was a talented, refined woman. She stressed the importance of educational achievement to her sons. Together, the couple instilled a sense of dignity and purpose in their boys.

Discrimination, Education & The Practice of Law

After high school, Thurgood went to Lincoln University, where he starred on the school’s debate team, helping to earn Lincoln national recognition. Thurgood paid his tuition by working summers as a porter for 10+ hours a day in the hot railroad kitchen, earning $55.00 each month. Reflecting on the value of hard work years later, Thurgood said, “A man can make what he wants of himself if he truly believes that he must be ready for hard work and heartache.”

Before his last semester at Lincoln, Marshall married his sweetheart, Vivian Burey. The two moved into Marshall’s parents’ home.

After completing his undergraduate in 1930, Marshall set his sights on law school. He preferred to attend the Maryland School of Law but did not apply due to segregation policies. He used and was accepted to Howard University’s Law School, the “Black Princeton” of its day. There he met the quiet, brilliant Dr. Charles Houston. Houston became Thurgood’s mentor, and the two would later work as colleagues to eradicate segregation in schools. Commenting years later on Charles Houston’s influence, Thurgood said, “ I never worked hard until I got to the Howard Law School and met Charlie Houston…I saw this man’s dedication, his vision, his willingness to sacrifice, and I told myself, ‘You either shape up or ship out.”

Marshall first graduated his class in 1933 and began work in private practice with some friends, but clients were hard to come by during the Depression. Dr. Houston aided Thurgood by introducing him to his NAACP contacts. Thurgood eventually became Chief Counsel for the NAACP’s Legal Defense & Education Fund.

In 1934, Charles Houston and Marshall toured the South to observe the deplorable conditions that the ‘separate but equal doctrine (Plessy v. Ferguson, 1896) had produced. Marshall began working with Houston to build a case against Plessy. Their plan included asserting that the law actually required facilities to be ‘separate AND equal.’ They reasoned that the expense and tedium of making separate facilities equal would financially exhaust Plessy out of existence. Threats against his life during this period were not uncommon, as many of the cases he argued upset segregationist norms.

Appealing multiple cases and enjoining them took years, and in 1950, Dr. Houston, the visionary who’d pioneered the effort for nearly 30 years, died. But in 1954, his mentee Thurgood Marshall, having successfully argued Brown v. The Topeka Board of Education before the Supreme Court of the United States, triumphed. Segregation in schools was declared illegal.

The case was one of many that Marshall argued before the Supreme Court. Out of the 32 cases he led, he won an impressive 29 of them.

In 1967, President Lyndon B. Johnson nominated Marshall to serve on the Supreme Court. He joined the liberal majority of the court and developed a strong kinship with Justice William Brennan. The two generally voted en bloc.

In a 1987 speech recognizing the 150th year of the United States Constitution, Justice Marshall reflected on the law of the land, and its significance to him:

“What is striking is the role legal principles have played throughout America’s history in determining the condition of Negroes. They were enslaved by law, emancipated by law, disenfranchised and segregated by law, and, finally, they began to win equality by law. Along the way, new constitutional principles have emerged to meet the challenges of a changing society. The progress has been dramatic, and it will continue…We will see that the true miracle was not the birth of the Constitution, but its life, a life nurtured through two turbulent centuries of our own making… I plan to celebrate the bicentennial of the Constitution as a living document, including the Bill of Rights and the other amendments protecting individual freedoms and human rights.”

In 1991, due to failing health, Justice Marshall announced his retirement. President, George H.W. Bush was tasked with naming his replacement. The man President Bush chose shares a similar background with his predecessor–humble beginnings, an independent, masculine father figure, experiences with racism, academic achievement, and a disciplined work ethic: Clarence Thomas.

Ukrainian Orphan Adoptions in Painful Limbo, and What Can Be Done to Help