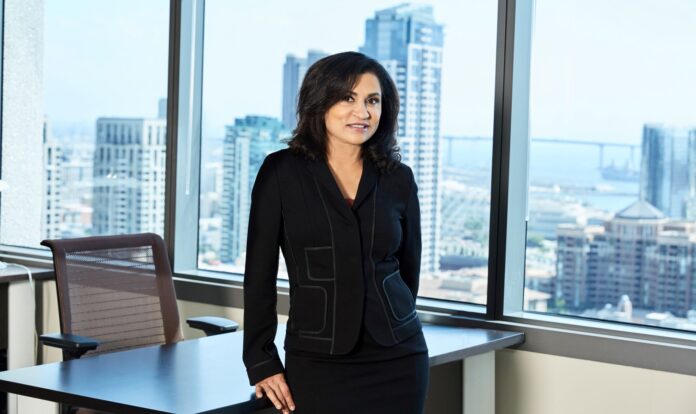 Needless to say, being a high-powered attorney in Manhattan for a firm that regularly wins billions of dollars on behalf of its clients would be a high-stress job for anyone. But Ruby Menon has not only thrived as a 16-year veteran of the firm: she’s done it all as an immigrant and a single mom.

“Currently, my title is Of Counsel,” she begins. “I work for one of the biggest securities litigation firms in the country, Robbins, Gellar, Rudman & Dowd. I go to the public funds and look at their investments, and if there’s a loss due to fraud or misrepresentation of the stock market, we make a presentation to the fund and say, ‘Look, you guys lost, say, $10 million.’ Then we file a lawsuit on their behalf.”

But Ruby’s career began far from Manhattan and the world of investments and securities fraud. “When I graduated law school, I became an assistant prosecutor in the city of Indianapolis,” she says. “I worked there for three years, but when I was doing all the criminal stuff, I learned I definitely did not want to be a criminal lawyer. Plus, I was working long hours and was always on my feet, and at the time, I was trying to have a baby.”

The experience helped Ruby discover her real passions in the field. “I realized I wanted to be more of a pension administrator,” she explains. “I loved the fact that General Counsels had so many different duties. When you’re working for a pension fund, you’ve got to quickly master different projects, and investments is a huge part of it.” Thus, Ruby answered an ad for a pension lawyer for the state of Indiana. “It took them six months to make a decision, but I kept at it,” she says with a laugh. “And even today I talked to a woman who worked there, and she told me, ‘Your persistence paid off!’”

While Ruby’s career thrived and eventually brought her to the heart of New York City, the ride has brought some challenges along the way. “In the pension industry at that time, it was all dominated by men,” she explains. “I’ve always had a voice, but my voice was just never heard. Being a woman, especially being a woman of color – I felt I was often not taken seriously.” So common was Ruby’s experience at the time that she didn’t even realize things could – and should – have been different. “I only moved to the U.S. when I was 17, and I’m from a very patriarchal society. So I really thought that was part and parcel of being a woman in a very prominent industry.”

Despite – or even because of – the difficulties she faced, Ruby began to understand her own values and the strengths she brought to the table. “I think I took it in stride,” she says with a streak of pride. “I do believe we’re all equal. If there’s a man who’s doing the same job as me, he should be treated the same way I’m treated. I really just want what’s due to me; I don’t want any special preferences.”

She’s hopeful for the future, too. “It’s amazing just in the last two or three years, things have dramatically changed,” Ruby describes. “The other day, one of the judges commented that there were nine women in her courtroom, and she remembers being the only woman on the job. I’m really happy to see that for the younger generation, things are going to be a lot better.”

Even more than being a woman in a male-dominated industry, Ruby soon had to balance single motherhood in the mix, too. “I became a single woman with two little kids, so my job and my income were very important,” she says. It would have been impossible to maintain her position while raising two children alone, so Ruby leaned on her mom for support. “Sometimes you just need people to help you,” she says honestly. “My mom understood that work was very important, and she helped me with the children. I would even say those personal issues became hurdles in achieving my professional goals. Those 10 years were pretty hard. But thank God my mom was there.”

Today, all the hurdles Ruby has faced have only cultivated growth, both professional and personal. “I think I was very naïve in the beginning. I wanted to win everything,” she recalls. “Now, winning has a different meaning for me. Winning is different than happiness for me now.”

And by no means does Ruby feel she’s done growing, either. “I do believe that every day I’m learning something or the other,” she says. “To me, that’s such a great feeling, you know?”

A Timeless Lesson from the Life of Dr. Martin Luther King

Finding Your Financial Focus For 2022

Celebrate the Holidays by Giving Back