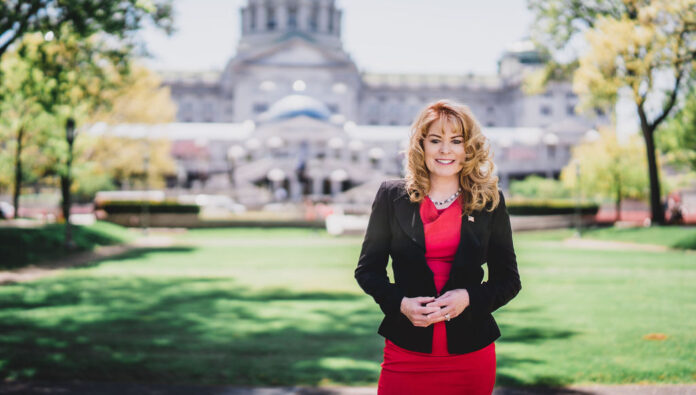 A glance at the local or national news proves that people campaign for political office for a variety of reasons. Some enter politics because they are intent on making a change, while others may seek personal fame or glory. But a few people become elected leaders simply because they’re called to serve. Their careers—and their lives—revolve around their responsibilities to other people; serving the public in elected office is simply an extension of their life’s work.

The 78th state treasurer of Pennsylvania, Treasurer Stacy Garrity, is one of these leaders. Elected in 2020, Treasurer Garrity may still be early in her political career, but she is no stranger to service. In her professional history, including in the U.S. Army Reserves, and her personal life, she exemplifies the values of dedication to God, her family, and the people of Pennsylvania.

From Dog Tags to Fiscal Watchdog

Much of Treasurer Garrity’s commitment to service came from her time in the Army Reserves, from which she retired in 2016. She earned two bronze stars throughout her military career, and she describes her service as the honor of a lifetime. “I had more than 30 years of service to our country under my belt, including three overseas deployments,” she recalls. “It was initially nice to scale back to just my full-time private-sector position, but it didn’t take long for me to feel the pull to serve the public again.”

That pull led her to enter a special election for an open Congressional seat, but with a crowded field of 31 candidates, it was difficult to break in. Still, Treasurer Garrity says, “I had a wonderful experience, and I made it to the top 20 percent.” When it was time to announce candidacies for state treasurer, some people approached her about running for the seat. “I initially said, ‘Absolutely not.’ I had reservations about entering a statewide race without having run a campaign before. But I prayed about it, thought about it, and decided if not me, then who?”

The race was tight, but she beat the incumbent by 78,000 votes, and he called her to concede a week after Election Day. “I am so grateful to God for this opportunity to continue to serve the public in this way,” she says, “and I’m incredibly thankful for the Pennsylvanians who had faith in me when they cast their vote.”

Today, Treasurer Garrity describes her duties as twofold. “The biggest job of Treasury is to be the fiscal watchdog for more than $150 billion in state assets. I’m dedicated to making sure I’m delivering on my promises to protect every taxpayer dollar here in the Commonwealth and make sure our government is as transparent as possible,” she explains.

“I’m also dedicated to making sure every Pennsylvanian knows about our great savings programs,” Treasurer Garrity continues. “First, PA ABLE provides savings options for Pennsylvanians with disabilities so they can save money without losing access to means-tested benefits they rely on. And our PA 529 College and Career Savings Program helps families save for higher education expenses for trade schools or four-year universities and even apprenticeship programs. Both programs offer big tax advantages for families.”

Treasurer Garrity is especially focused on getting information about the 529 Program and the PA ABLE accounts to communities who are traditionally less likely to utilize them. “I’m dedicated to expanding our rural outreach to meet Pennsylvanians in their own backyards to let them know they’re not forgotten about in Harrisburg,” she says.

In addition, the Treasury runs Pennsylvania’s unclaimed property program, where people can search the database at www.patreasury.gov/unclaimed-property for money or property that belongs to them, for example, if it was left to them unknowingly in a will. “We’re working to return more than $4 billion – that’s billion with a ‘B’ – in unclaimed property with its rightful owners,” Treasurer Garrity says.

Treasurer Garrity believes the most meaningful part of the program is returning hundreds of military memorabilia to veterans and their families. “Since taking office,” she describes, “I’ve returned 233 decorations from military buttons and dog tags to Bronze Stars and Purple Hearts. I hope we can return them all. Each one is part of someone’s story, a priceless symbol of the sacrifices made by individuals and families to protect our nation.” It’s a special connection between Treasurer Garrity’s service to the nation and her new duty to the people of Pennsylvania, and she calls it even more meaningful than earning her Bronze Stars.

Even apart from her busy career, Treasurer Garrity’s commitment to others remains at the top of her mind. As an active member of Christian Life Church, located just over the Pennsylvania border in Waverly, New York, she credits her family with instilling a deep Christian faith in her. “The strength of God and my faith have been instrumental in my life’s journey and helped me every step of the way,” she says. It was her faith that led her to take part in six mission trips to Haiti through Mission Possible. “I helped construct concrete floors and paint some of the program’s schools,” she recalls. “We also visited orphanages, handed out clothing, and ministered to the local people.”

But her commitment to the Haitian people, particularly children, didn’t end when she stepped back onto U.S. soil. “In Haiti, to attend school, a child must have a pair of shoes, and most of the kids didn’t have shoes,” she explains. “I always say, the people where I come from in Bradford County, Pennsylvania, solve a problem when they see one. So when I returned home, I organized a shoe drive, and with the help of our neighbors and local businesses, we collected and shipped 1,500 pairs of shoes to Haiti.”

For anyone in political office, it’s easy to allow the speaking engagements, newspaper and TV spots, and public appearances to become the focal point of the role. That’s why, as soon as she entered office, Treasurer Garrity grounded herself with a symbol of the principles that originally inspired her to run for higher office. “In the military, we had something called a challenge coin, which were first made to be carried so that, if questioned, someone could prove they belonged to the military,” she explains. “They’ve morphed into symbols of ideals to live by. When I took office, I had a challenge coin made. It includes the motto of the military police: ‘To Assist, Protect, and Defend’ on one side and our state seal and motto—’Virtue, Liberty, Independence’—on the other. These are reminders of my dedication to service.”

Treasurer Garrity’s career and story are demonstrative of the words on her challenge coin. To her, they are the fullest expression of a life well lived. “‘Success’ isn’t an end-all or a stopping point,” she says. “Success for me is living a good life, making a difference for others, and knowing that I did my absolute best with whatever came my way.”

Four Traits to “COPE” During COVID-19