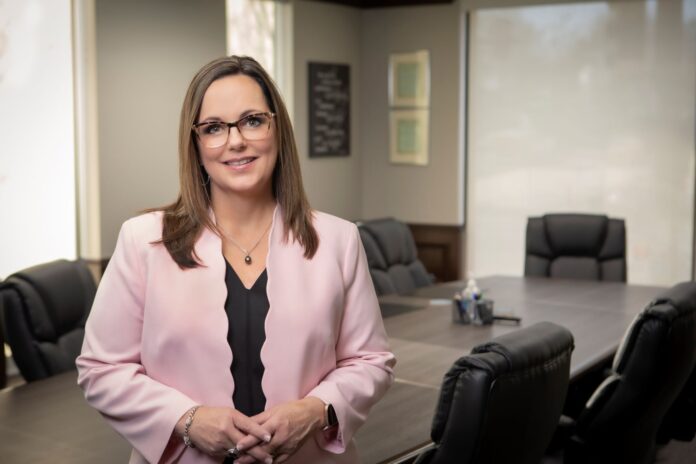 “Nobody is going to rescue you.” Samantha Compton now recalls these words as a “light bulb” moment.

Freshly divorced, at 38-years old, Samantha was worried about how she would care for herself and her two young children. “It was a low point in my life,” she acknowledges. At one point, she says she took account of the food on hand in the house – Parmesan cheese, spaghetti noodles, and some peanut butter—and then went to the car to look on the floorboards for some change. “It was around Christmastime and I didn’t want the kids to know how bad it was. I remember thinking, if I can just buy a loaf of bread, we can probably make it [to the next paycheck] without them knowing.”

She had just finished asking God for direction when those words came to mind: Nobody is going to rescue you. “It wasn’t that God wasn’t going to be there to help me,” she explains, “the realization was that if this situation is going to change, it was up to me to change it.”

With the “A-New-Man-is-the-Plan” option (her secret hope) off the table, Samantha says she began researching everything she could about budgeting and saving to try to help make ends meet. Noting all the research she was doing, a friend suggested she interview with a financial firm she knew was hiring. “I laughed because I thought it was hilarious.” When she was married, she’d worked but only part-time. She had not built a career. Thankfully, her friend did not relent. “What do you have to lose?” she asked.

Samantha did interview with the firm and was hired. “You have the competencies we’re looking for,” her new boss told her. Training for the job involved studying and passing several rigorous exams. Samantha amazed herself by passing the first test, and then a second one, and another. “Every week I’d think to myself, ‘Okay, I’ve got just one more week, but in the meantime, I’m getting paid, so I’m going to keep going.’” At the end of the months-long training, she’d acquired both her securities and insurance licenses. Reflecting on that time, she says, “When I started, I couldn’t see the tenth step. I couldn’t imagine it. I was scared to death to even think about it.” Ignoring the voices of self-doubt that whispered, “What if you fail?” Samantha says, “I just kept doing the next thing.”

Samantha is now in her tenth year of doing the next thing and is a senior financial advisor and Women’s Investment Specialist with Wise Wealth in Lee’s Summit, MO.

Some of her work involves facilitating conversations between husbands and wives about their financial goals. “In most families, there is a chief financial officer (CFO) and a non-CFO. Everything is generally fine until something happens to the CFO. When something happens to the CFO, fear takes place. When people are functioning from a place of fear, they may make unwise decisions and become vulnerable to people who don’t have their best interests at heart,” she explains.

Additionally, because many wives become caretakers for their husbands and outlive them, women need to have a firm plan in place and knowledge of the resources available to them well in advance. A good advisor can help clients develop a plan and she will revisit that plan regularly with her clients to keep it fresh. “I am passionate about these things,” Samantha says, “because I came from a place of not knowing. Spouses are not always going to be there to take care of us.”

Samantha says she strives to “give people a framework of understanding to work through, and principles to follow.” A few of the principles and practices Samantha learned on her journey are:

1) First wisdom, then wealth. When you understand and apply knowledge to your life, it becomes wisdom. When you have wisdom, you’ll have wealth (not just financial) in many areas of life.

2) Have a plan for your money. “Money used to control every emotion I had,” Samantha says. “When I had more money, I felt happy. When I lacked money, I was stressed and sad.” Become the boss of your money by developing a plan for it instead of letting it boss you around.

3) Small beginnings are beginnings. Samantha started by saving just 1% of her paycheck. Every six months, she increased the percentage until she reached her goal savings rate. “You can always do something. It’s that series of small little bits that will take you where you want to go,” she says.

4) Walk with humble confidence. Humble confidence says, “I may not know everything, but I’m going to do what I know to do today.” This mindset keeps us on the road that leads us to where we are supposed to be.

5) Life is about so much more than money. Samantha says, “I became a financial advisor first and foremost for my family. It was the door that God opened shortly after the realization that I needed to make some different choices. And though I was completely unsure of myself as I walked through that door, I wanted to model bravery to my children. Instead of seeing me live like a victim of my circumstances or even my own poor choices, I wanted them to see that true change was possible! And by God’s grace, if I could learn new things, so could they.”

Samantha knows that going from a comfort zone to losing almost everything and having to rebuild alone makes her a uniquely skilled financial professional.  In a reflective testimony, she writes,

“At one point, I lived in a pop-up camper in my friend’s driveway because I had no place to live. Later, I slept on a couch for 18 months because I could only afford beds for my kids. When we moved to a small home, I was able to buy a bed of my own. Who’d have thought that at 40 years old, I’d be excited about having my own bed! But God allowed me to go through those things. In the darkest of hours, I was never alone. God brings beauty from ashes, and He promises to share wisdom freely when we ask him for it. I lived with nothing so that I could appreciate the things I do have. My life has been full of things that bring richness on the other side.”

National Financial Awareness Day: What Does It Mean for You?