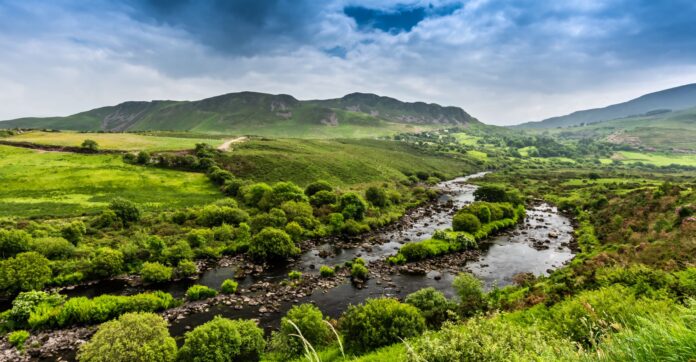 Every year on March 17, people around the world with Irish heritage—or simply a fondness for leprechauns and shamrocks—adorn themselves in green to celebrate St. Patrick’s Day. Many know St. Patrick was a real person who brought Christianity to Ireland; legend has it he also drove all the snakes from the isle. But he was far from the only person to help spread the faith across Ireland. In honor of Women’s History Month, the lesser-known St. Brigid of Kildare deserves recognition as a spitfire of a woman who also spread the Christian faith, especially to those lower in the social caste. The stories and legends of St. Brigid show her remarkable courage, fortitude, and heart for women and the poor, even from the very beginning of her decision to pursue a consecrated life.

St. Brigid’s heart for the less fortunate likely came in part from her lack of privilege. She was born into slavery around the year 450 to a Portuguese Christian woman named Brioicsech, who had been captured and brought to Ireland as a slave to her father, Dubhthach, a pagan chieftain. Even as a child tending to her father’s farm, she was known to be generous to the poor, and she gave them butter and dairy despite it angering her father.

After St. Brigid met and was baptized by St. Patrick, she decided to become a nun. Her decision was complicated, though, by how it meant her father would have no dowry, and because of her beauty, St. Brigid had already received several marriage proposals. However, despite her father’s angry insistence on marriage, she refused to give in: instead, she prayed God would take her beauty so the proposals would stop. Legend says her face was instantly transfigured, and her beauty evaporated, only to be restored to her when she became a nun at age 15.

St. Brigid’s path was a particularly trailblazing one considering there were no monasteries for women, known as convents, in Ireland at the time. When she decided to found one of her own, she gathered a group of seven companions and petitioned the king of Leinster for land on which she could build it. She described how she had found the perfect plot: near a forest for firewood and berries, fertile and with a lake nearby for water.

The king laughed and refused to give her any land, but instead of being deterred, St. Brigid prayed. She asked if the king would grant her all the land her tiny cloak would cover, and the king agreed. Legend says four of her companions each took a corner of her cloak and sprinted off in opposite directions, with the cloth growing miraculously as they ran. The king was astounded, and in addition to granting St. Brigid the land, he commissioned the building of the convent himself, which was named Kildare.

Late one night, years later, a woman from the village fled to the convent, terrified for her life. A nobleman had entrusted her with a silver brooch but then secretly stolen back and thrown it into the sea. He accused her of stealing it, which gave him grounds to take her as a slave. St. Brigid offered the woman refuge, which she didn’t need for long. When the convent’s fisherman returned and cut open one of his catches, they found the brooch inside: the fish had swallowed it. The nobleman confessed his sin and freed the woman, and despite his stature and power in the community, he bowed before St. Brigid in submission.

St. Brigid’s life is full of these stories of protection for the weak and needy and bold courage in the face of powerful people, but she is perhaps best remembered for creating “St. Brigid’s Cross.” Later in life, she was called to the bedside of an old Pagan chieftain—some say he was her own father—who was close to death and delirious. She tried to calm him with consoling words, but he seemed beyond help. Again undeterred, she picked up some rushes from the floor and began weaving them into the pattern of the cross. As the chieftain quieted, she told him the meaning of the cross, and peace slowly overtook his face. The chieftain asked to be baptized, and he died a Christian shortly thereafter.

St. Brigid may not be remembered around the world quite like St. Patrick, but the Irish remember her every February 1 as the harbinger of warmer, brighter days to come, when children weave the same cross that she once gave the chieftain to display in their own homes. This Women’s History Month, may we all reflect the courage, perseverance, and the heart for the needy as St. Brigid of Kildare.

Martin Luther King, Jr. — In His Own Words